A trippy new patient room at Children’s Hospital in Minneapolis is capable of producing an orange scent, or piping musical vibrations to a comfy chair, as part of the hospital’s movement away from conventional drugs and toward alternatives to help children in pain.

A cornerstone of the hospital’s new, $3.1 million pain and integrative medicine center, the so-called Snoezelen room looks less like a clinic and more like someone dropped the Starship Enterprise into a yoga studio.

Contoured chairs are surrounded by glowing lights and fiber-optic cables, as well as bubbling tanks of water that extend from the ceiling to the floor. A wireless panel allows patients to adjust the brightness and color of everything.

Behind the space-age look, however, is a lot of basic understanding about the body and ways to diffuse pain through relaxation, meditation and distraction, said Dr. Stefan Friedrichsdorf, Children’s director of pain medicine, palliative care and integrative medicine.

“A normal hospital room, a normal clinical room, is just the wrong surrounding [for many children in pain],” Friedrichsdorf said. “They may get even worse.” 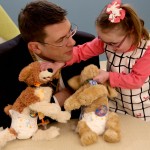 Dr. Stefan Friedrichsdorf talked quietly to Kali McKellips, 8, as she arranged her stuffed dogs for a picture.

Snoezelen rooms, pioneered in the Netherlands 30 years ago, are designed to engage patients’ senses of touch, smell, sight and sound, and to give them the control over their environments that they often lack as hospital patients. The name, pronounced SNOOZE-Len, combines the Dutch verbs snuffelen (explore) and doezelen (relax) and is a brand name for a broader medical specialty called multisensory stimulation.

Friedrichsdorf said the concept was an ideal fit with the renovation of Children’s pain clinic, which for years has been trying to advance noninvasive alternatives such as acupuncture, aroma therapy, guided imagery and exercises that use biofeedback to rewire the brain’s responses to pain.

The Snoezelen room includes a device that can replicate relaxing scents such as peppermint or spearmint. It also features a video system that projects interactive games on the floor.

Like everything in the room, the game can distract kids from their suffering. Studies have shown measurable declines in agitation and pain, and improvements in areas such as sleep quality, after time in Snoezelen rooms.

“When kids de-stress,” Friedrichsdorf said, “they actually do much better. They heal faster.”

At the same time, the games and sensory activities in the room also encourage motion and stretching that can have therapeutic benefits.

Pediatric pain management has been a somewhat misguided field, Friedrichsdorf said, overusing costly nerve-block injections that interrupt the body’s pain signals to the brain. He also disagrees with the common practice of “desensitization” to numb aching body parts for children with disorders such as complex regional pain syndrome.

“If anything, it makes it worse,” he said.

Caroline Marshall developed this syndrome at age 8 after injuring an ankle in a trampoline accident. Pain and swelling worsened because her brain’s physiological response to the injury was abnormal. At its worst, the pain prevented her from climbing aboard the school bus and required her to use a wheelchair at school.

“She wouldn’t put socks on her feet,” said her mother, Sarah Marshall, of Eden Prairie. “She wouldn’t get in any bathtub water because it would burn her foot, or it felt like it was burning.”

Desensitization treatments, rubbing cotton and fleece on her ankle to mask her pain, were agonizing and didn’t work. At Children’s, she continued traditional physical therapy but tried a variety of other approaches, including mirror therapy. Stretching exercises were done to her pain-free foot, but through the mirror, it looked to Caroline’s brain like the opposite foot was being treated. And the injured foot would feel better.

Now 10 years old, Caroline also learned breathing exercises and other ways to calm herself to lessen pain, and she has been able to return to soccer, dance and other favorites.

“As a parent, it’s still a little mysterious to me,” her mother said, “but she utilizes those skills and is able to get the pain under control.”

The transition toward integrative and alternative care in the U.S. is reflected in the growth in Snoezelen rooms, and not just in hospitals. An Owatonna memory-care facility is among many that use the rooms to engage and stimulate the minds of elderly patients with Alzheimer’s disease. Schools serving children with developmental or behavioral problems are considering Snoezelen rooms to help agitated kids calm down.

Ministry St. Joseph’s Hospital near Marshfield, Wis., opened the first Snoezelen room in a pediatric hospital unit in the Midwest two years ago. Children who are struggling with the nausea of cancer-killing chemotherapy, or suffering tense muscles due to conditions such as cerebral palsy, become “limp noodles” after spending time in the room, said Heidi Giese, manager of child life services for the hospital.

“You take them into an environment like this where they have some control — they can make some choices, they can refocus themselves — and all of a sudden for a half-hour to an hour they might not mention their pain once,” she said.

Snoezelen rooms also can be used to stimulate children with autism or traumatic brain injuries, and can serve as a soothing environment where parents can spend relaxing time with terminally ill children.

Caroline Marshall “graduated” from Children’s pain program months before its new center opened, but she was invited to test the Snoezelen room when it was unveiled at a public open house on Thursday. The center was built with the help of a $1.5 million donation from the late Aveda cosmetics founder Horst Rechelbacher and his wife, Kiran Stordalen.

Sarah Marshall is glad to see child pain getting so much focused attention. When her daughter’s ankle pain wouldn’t go away, people judged her and felt it was just in her head.

“ ‘Just deal with it, just suck it up and you’ll be fine,’ ” Marshall recalled as others’ advice.

“When you see your own kid have debilitating pain and not have a normal life anymore, its more than just sucking it up.”

View all posts by: Jacy Mcconnell