Fighting Dementia With Memories of Childhood and Happy Times

DOETINCHEM, Netherlands — “We’re lost,” said Truus Ooms, 81, to her friend Annie Arendsen, 83, as they rode a city bus together.

“As the driver, you should really know where we are,” Ms. Arendsen told Rudi ten Brink, 63, who sat at the wheel of the bus.

But she was joking.

The three are dementia patients at a care facility in the eastern Netherlands. Their bus ride — a route on the flat, tree-lined country roads of the Dutch countryside — was a simulation that plays out several times a day on three video screens.

It is part of an unorthodox approach to dementia treatment that doctors and caregivers across the Netherlands have been pioneering: harnessing the power of relaxation, childhood memories, sensory aids, soothing music, family structure and other tools to heal, calm and nurture the residents, rather than relying on the old prescription of bed rest, medication and, in some cases, physical restraints. 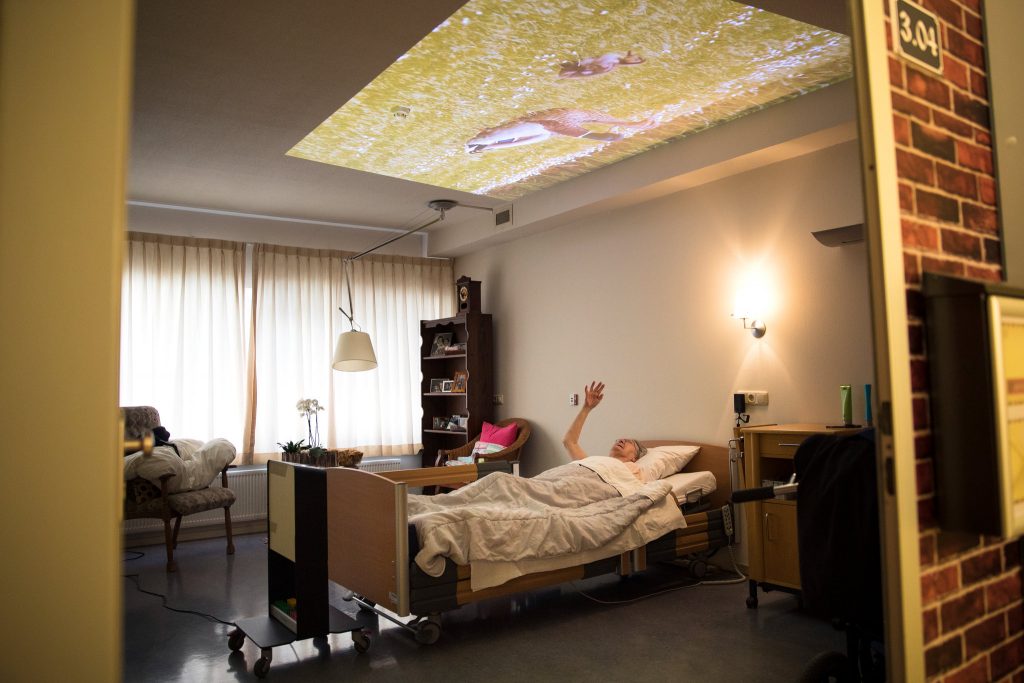 Willy Briggen, who is in an advanced stage of dementia, lives in a home in Eindhoven, the Netherlands. Images of nature are projected on the ceiling of her room to calm her. Credit Ilvy Njiokiktjien for The New York Times

“The more stress is reduced, the better,” said Dr. Erik Scherder, a neuropsychologist at the Vrije Universiteit Amsterdam and one of the country’s best-known dementia care specialists. “If you can lower stress and discomfort, it has a direct physiological effect.”

Simulated trips in buses or on beaches — like one in a care facility in Haarlem, not far from a real beach — create a gathering point for patients. The shared experience lets them talk about past trips and take a mini holiday from their daily lives.

Dementia, a group of related syndromes, manifests itself in a steep decline in brain functions. The condition steals memories and personalities. It robs families of their loved ones and saps resources, patience and finances. 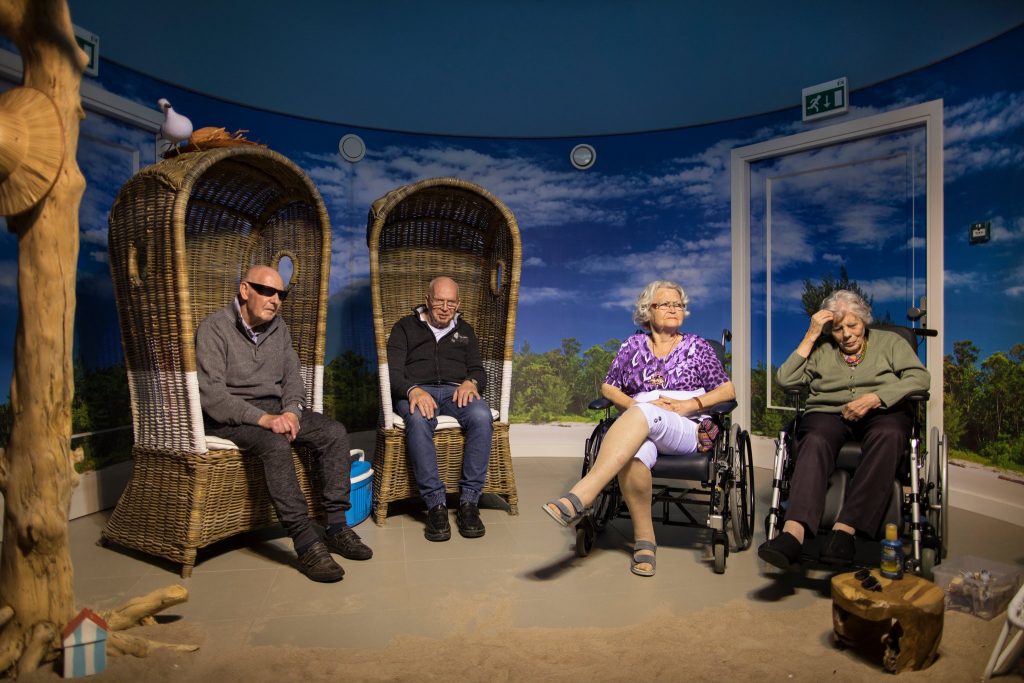 The beach room in the Houttuinen care center in Haarlem has real sand on the floor, heat-regulating lamps, and wind and the sound of waves piped in. Credit Ilvy Njiokiktjien for The New York Times 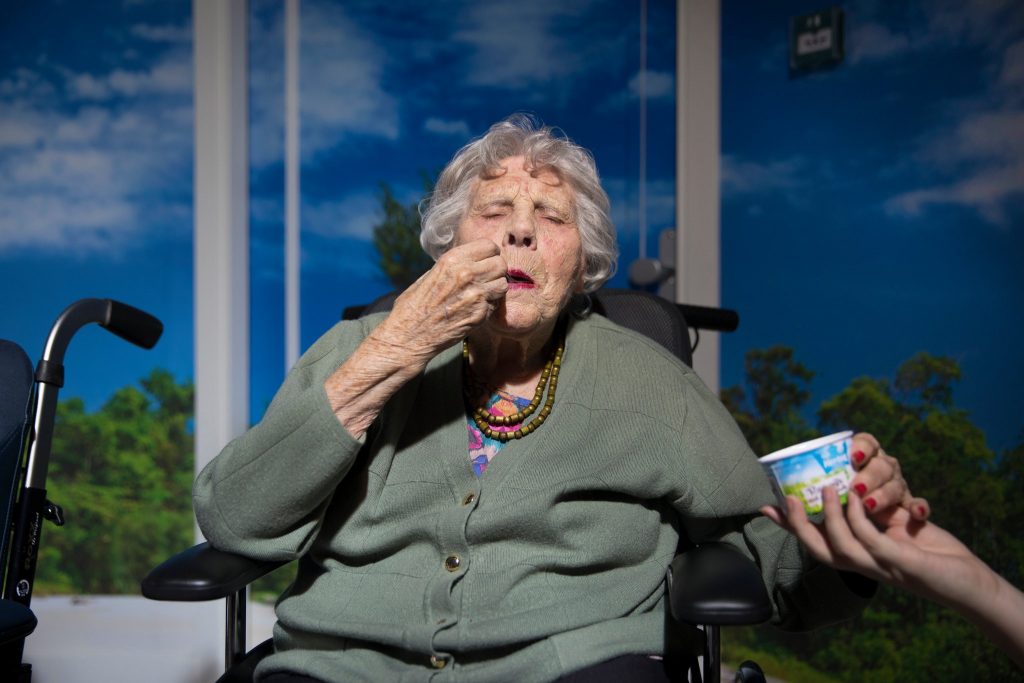 Up to 270,000 Dutch people — roughly 8.4 percent of the 3.2 million residents over the age of 64 — have dementia, and the government expects that number to double in the next 25 years.

In recent years, the government has preferred to pay for home care rather than in a licensed facility so most people with dementia live at home. The facilities, which are privately run but publicly funded, are generally reserved for people in an advanced state of the disease.

In the 1990s, the Dutch started thinking differently about how to treat the disease, moving away from a medicalized approach.

“In the ’80s, clients were treated like patients in a hospital,” said Ilse Achterberg, a former occupational therapist, who was one of the pioneers of “snoezel” rooms, which feature light, aroma, massage and sound therapy, and let patients relax and access emotions that are often blocked in stressful clinical settings.

These rooms were the forerunner of some of the techniques found today in many care facilities in the Netherlands.

At the Amstelring Leo Polak home in Amsterdam, for example, there is a reproduction of a city bus stop, where Jan Post, a 98-year-old patient, often sits and kisses his wife, Catharina Post, when she visits.

Mr. Post, who has severe dementia, can create only 10 seconds of short-term memory and is afraid of not finding his way back to his room when he leaves it.

“Seventy years married and we are still in love,” said Ms. Post, 92, who visits several times a week. 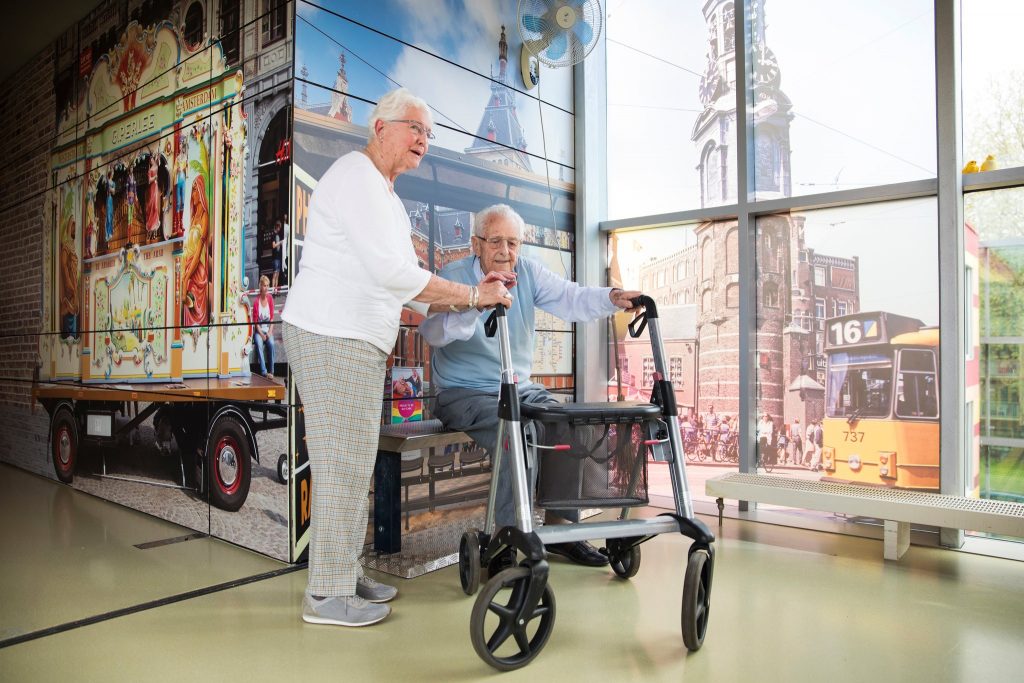 Catharina Post and her husband, Jan, viewing a projection of a tram stop at the Amsterdam Central Station in the Amstelring Leo Polak care center. Credit Ilvy Njiokiktjien for The New York Times 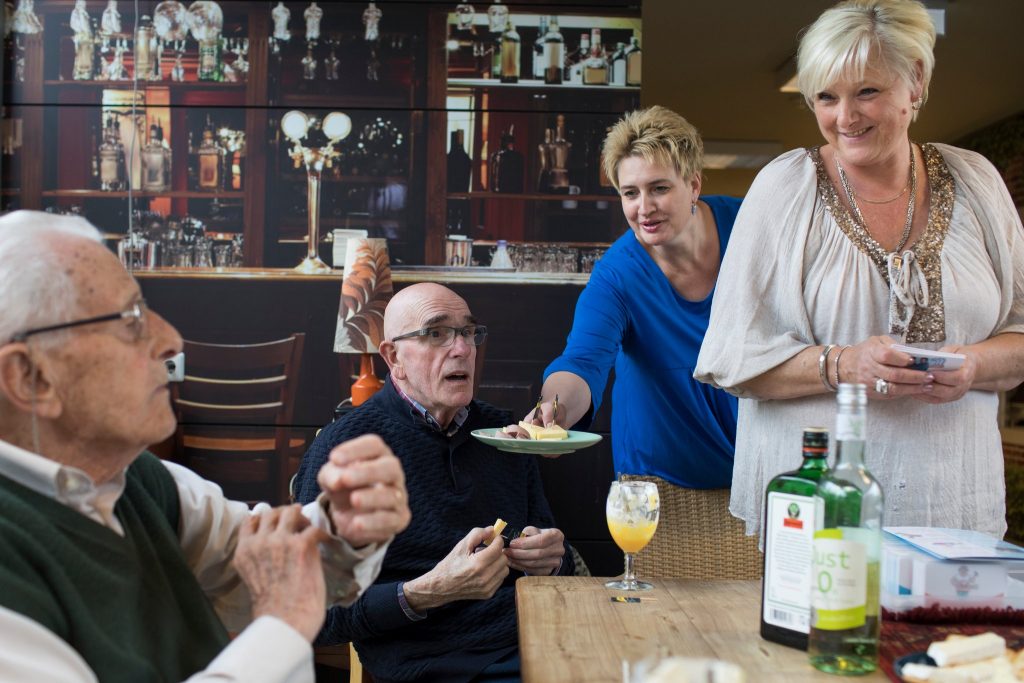 Mr. Post, left, and Harry Klein in a re-creation of an actual Amsterdam bar in one of the center’s common areas. The alcohol was real. Credit Ilvy Njiokiktjien for The New York Times

The Posts were drinking and chatting recently at Bolle Jan, a re-creation of an actual Amsterdam cafe in a common area of the home.

If the surroundings were fake, the alcohol was real, and the jokes, often repeated, drew real guffaws. The singing, at times wobbly, was enthusiastic.

While caregivers and academics believe that such environments help dementia patients cope better, solid evidence for their long-lasting effectiveness is hard to come by, in part because the condition has no cure.

But Katja Ebben, who is the intensive care manager at Vitalis Peppelrode, a home in Eindhoven, in the southeast of the country, said she had noticed that with the newer techniques, patients need less medication and fewer physical restraints.

Willy Briggen, 89, who is in an advanced stage of dementia, lives at the Eindhoven home.

Like many with dementia, Ms. Briggen sometimes becomes impatient, even unruly. The outbursts put a strain on the home’s staff, who struggle to deal with her frail frame. A decade ago, she might have been prescribed drugs or restrained to manage the outbreaks.

Ms. Briggen with a care worker, Helga Mathijssen-Maas. Ms. Briggen’s outbursts put a strain on the center’s staff, who struggle to deal with her frail frame. Credit Ilvy Njiokiktjien for The New York Times 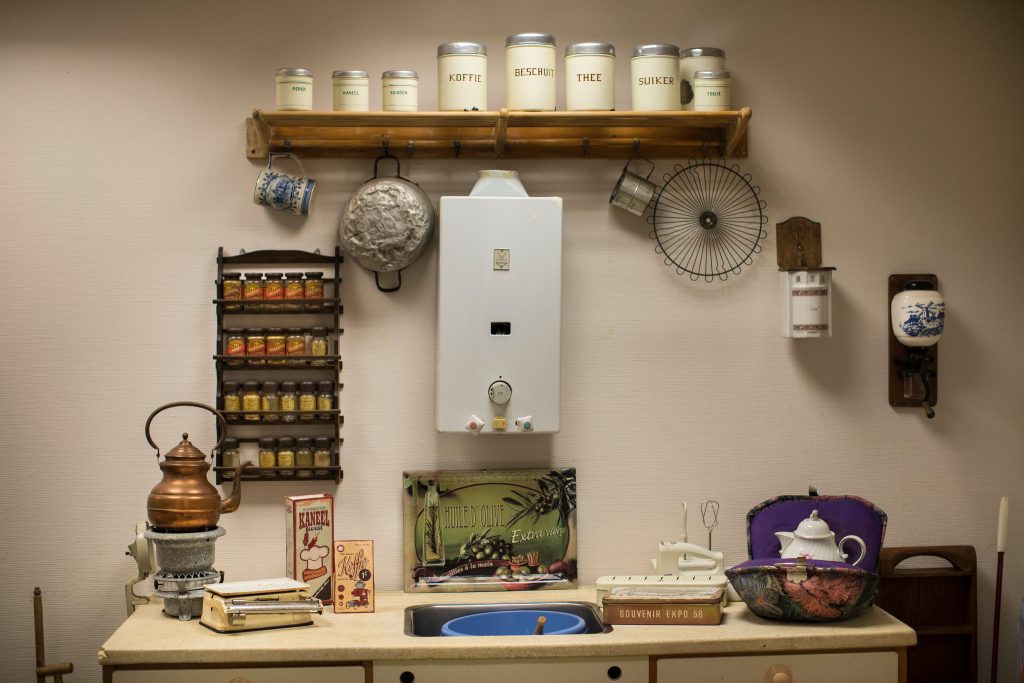 The Vitalis Peppelrode home features several rooms decorated in the style of an era when some of the residents were children. Credit Ilvy Njiokiktjien for The New York Times

But when she gets upset, the staff rolls a squat projector into her room, where it beams out calming images and plays soothing sounds.

On a recent visit, Ms. Briggen went from an obvious state of emotional discomfort to calm reflection as she gazed at the ceiling of her private room, which was festooned with projected nature scenes, including of ducks.

Of the 210 residents at the Eindhoven home, 90 have dementia and are restricted to special floors for their safety.

The brick-and-glass building has linoleum floors, low ceilings and wide doors to accommodate beds on wheels. Despite the medical style, its décor has echoes of a bygone era, when Ms. Briggen would have been a girl.

The floors feature old-fashioned, dark-wood furniture, and the rooms are decorated with books, rotary-dial phones and 50-pound typewriters. The cafeteria’s tables are covered by tablecloths and freshly cut flowers. It does not smell like a hospital.

In rethinking how to deal with dementia patients, many care centers have focused on the surroundings. Another tactic is to reorganize residents to create “family” clusters of six to 10 people.

Residents in many Dutch facilities have their own rooms, which they are encouraged to view as their own domain. There is often a communal living room and a kitchen, where residents help with chores like peeling potatoes and washing salad.

In the fight against depression and passivity, which are often symptoms of the condition, care givers also try to stimulate residents with activities like dancing.

“It’s really about all the little things that make a normal life,” said Pamela Grootjans, a nurse at Sensire Den Ooiman, the facility in Doetinchem that offers the simulated bus ride.

In the Christian Beth-San special care home in Moerkapelle, close to The Hague, Arie Pieter Hofman, 87, and Neeltje Hofman-Heij, 88, use a simulated bike connected to a treadmill to race through scenes from their old neighborhood in Gouda, projected onto a flat-screen display.

The company that makes the bike tour, Bike Labyrinth, has sold the simulators to more than 500 homes in the Netherlands. The Dutch maker of the projectors, Qwiek, says it has units in 750 Dutch care homes.

“The idea is to challenge the patient a bit in a positive way,” said Dr. Scherder, the Amsterdam neuropsychologist. “Leaving them in the chair, passive, make the disease progress much faster.” 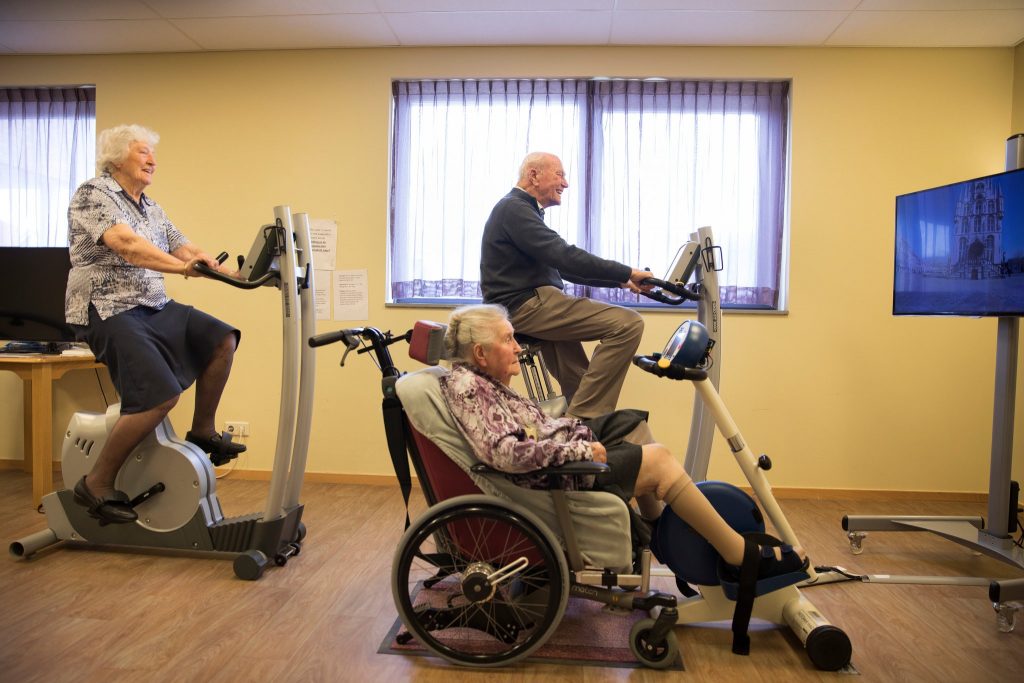 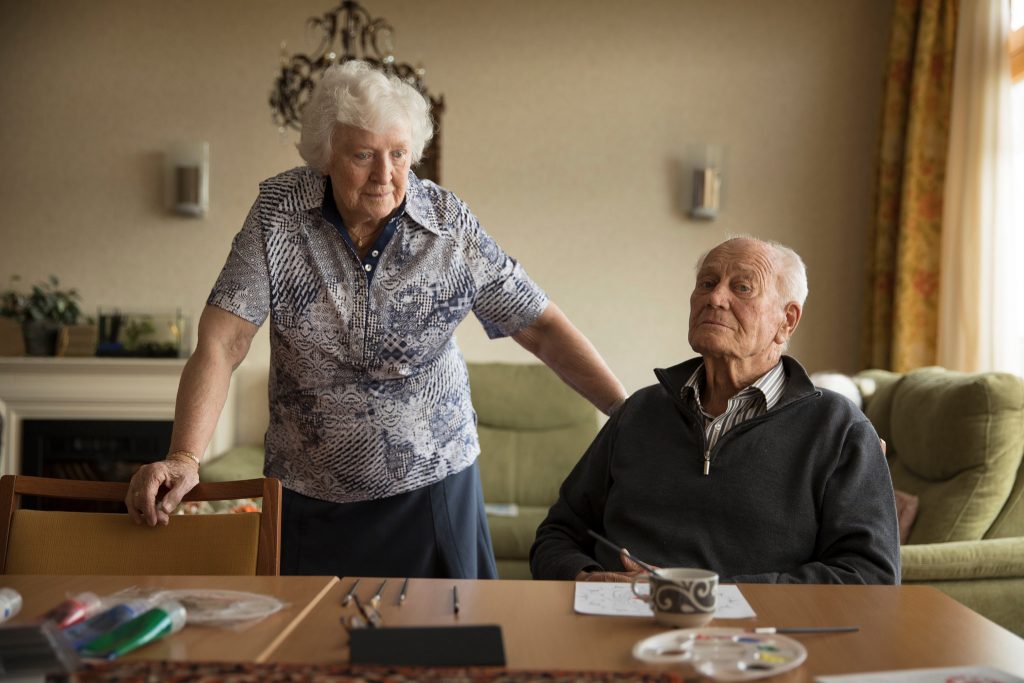 Mr. Hofman and Ms. Hofman-Heij in their living room at the center. Credit Ilvy Njiokiktjien for The New York Times

On a recent visit to the Vreugdehof care center in Amsterdam, one resident, Anna Leeman-Koning, 90, played with a therapy robotic seal. It helps brings old emotions to the fore, momentarily sweeping away disorientation caused by the resident’s irreversible, progressive loss of faculties.

But the seal began shaking its robotic tail too much, upsetting Ms. Leeman-Koning.

Click here to read the full article on The New York Times.

View all posts by: Jacy Mcconnell