A unique new school in northwest Calgary is a far cry from the cramped, old facility its special-needs students had been using, its principal says.

Christine Meikle School, which opened this month in Varsity at 50th Street, is for Grade 7 to 12 students who have moderate to severe developmental disabilities, delays with complex learning, or medical and emotional needs, the Calgary Board of Education says. It has about 80 students and room to accommodate 125.

For almost 60 years the program was run out of a building in Bridgeland. But as the student population grew, and the program took on children with more complex needs, it was decided the school needed a new home.

“It was a crowded, very busy place,” said principal Sandra Mann. “So we were thrilled to have this building built for us.”

The new building has wider halls to accommodate wheelchairs and medical equipment, and specialized spaces that combine educational and health-care facilities for the kids.

One of the most high-tech rooms is a space for kids who have behavioural and emotional control issues. 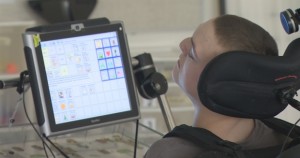 The school has specialized teaching tools for its students, who have a variety of complex learning, medical and emotional needs. (Evelyne Asselin/CBC)

The school has specialized teaching tools for its students, who have a variety of complex learning, medical and emotional needs. (Evelyne Asselin/CBC)

“They have a multi-sensory room, which is really a lovely space to help kids calm down,” Mann said.

Most schools build a playground as an afterthought, Mann said. But at Meikle, the playground — which has accessible equipment, a wheelchair track and specialized workout machines — is an integral part of the learning.

“We have a pool therapist who is developing programs for each class and each student, in conjunction with their physiotherapist and their occupational therapist,” Mann said. “So, it’s really very personalized.”

Mark Misunis, whose autistic son Craig attends the school, says the new building is a vast improvement over the old one. 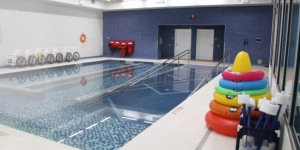 The school has a warm, salt-water therapy pool. (Evelyne Asselin/CBC)

The school has a warm, salt-water therapy pool. (Evelyne Asselin/CBC)

“This building is everything you could hope for, and more,” he said.

In 2014, a group of 30 area homeowners in Varsity took the public school board to court in a bid to block construction of the school.

Their lawsuit argued that the school would reduce the value of their homes and that the board didn’t have the right to build on the green space at 50th Street between 40th and 32nd avenues.

But the residents withdrew their legal action in 2015. 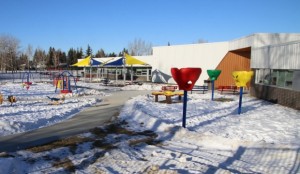 View all posts by: rompa_admin